Think Steig’s “Brave Irene” Had Courage? Meet Leonard, of His “The Zabajaba Jungle.” 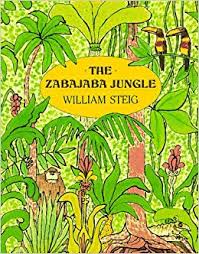 Think of the word “spunk.” Irene of Steig’s “Brave Irene” had plenty of it as she ventured forth in a blinding snow storm to deliver a dress her dressmaker mom had made for a ball. This was a young girl who would not be deterred from a mission.

Leonard, of “The Zabajaba Jungle,” has spunk in spades. He ventures into something not cold, but the opposite; he plunges into a jungle, bolo or machete in hand, into a mysterious flora and fauna, alive with a petrified monster, legions of slithering snakes, an ambush by a mandrill monkey and a dramatic trial worthy of “The Caine Mutiny!”

What I love about William Steig are his adventuresome narratives, filled with derring do in which the lead comes into a series of conflicts that might deter lesser souls – and they are NOT deterred.

They forge forward, perhaps with surprise, awe and even a bit of fear at the circumstances in which they are plopped down, or even plop themselves into. But, forge ahead they do and find a way to deal and do their best, which is perhaps all they needed to do.

That, coupled with William Steig’s unapologetic use of challenging and unusual vocabulary for picture book reader age, has captured my heart from the start. And when you balance all of those factors with a man who did not start his foray into the world of the picture books till he was in his 60’s, you can easily see why his protagonists are brave souls; like him.

Referring to his use of vocabulary, here are just a sampling of those from “The Zabajaba Jungle”:

cloaca – had to look that one up

William Steig, winner of a Caldecott Award for his second picture book called “Sylvester and the Magic Pebble,” has the sometimes strange and imaginative world of childhood at his finger tips and the artistic powers to capture and make the rareness of his narratives believable and accessible to young readers.

It is a rare gift. Lewis Carroll would have approved of William Steig.

Would you crawl through the gaping maw of a petrified monster? And, by petrified, I don’t mean frightened; I mean preserved. Leonard would and does.

Would you crawl through the intestines and be astounded to find strange writing on the wall? Leonard would and does.

Would you answer the birdsong of a strange flora who calls, “Oh, human being!” and when she invites you to a sampling of a delectable nectar, you agree to a sip. Leonard would and does.

What would you say to a trial where the judges are three weird creatures; one with a bird head, one with a rat head and one with the head of a snake who accuse you of drinking of the Zabajaba Flower? Would you show them who you are with a display of fireworks from your knapsack? Leonard would and does.

Would you be surprised to see Mom knitting and Dad reading inside a enormous glass bottle steps away from your trial and release them from captivity? Leonard would and does.

Please allow your young readers a trip to “The Zabajaba Jungle” by William Steig this fall and the pandemic and its fearful face, will be put into proper perspective by Leonard.