A Tasty Treat of a Friendship with Bite 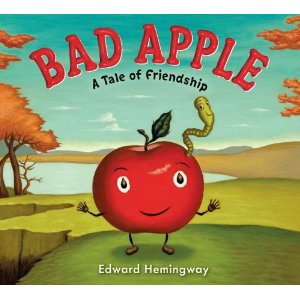 Bad Apple: A Tale of Friendship

There has been much in the news of late on the problem of bullying. How do parents teach children behaviors they want them to model and to stand up against the group for what they believe is right?

And in that vein there is a book called Bad Apple: A Tale of Friendship by Edward Hemingway which I feel addresses some of the issues that I just mentioned. The book was published in 2012—just in time for “back to school.”

Does “one bad apple spoil the whole barrel”? This is a phrase which the popular culture uses often to rationalize its judgments of the individual who doesn’t quite fit. Not according to Edward Hemingway author of Bad Apple- A Tale of Friendship. Edward happens to be the youngest grandson of the renowned Ernest Hemingway.

And though, as far as we know, Ernest never wrote picture books, Edward has inherited a certain flair for the written word. His tale of Mac, a red Mackintosh, and Will, a worm who befriends him is a story of an odd pairing that flies in the face of the laws of agronomy.

The question is, do worms a bad apple make by association? And if so, is it worth jettisoning a friendship that includes learning how to fly a kite, literally finishing each others sentences, playing in the dirt and ending a day in a watering hole to clean off? The taunts of bullies and his sense of self, cause Mac to ask a question kids have asked for generations. How do I stand up to bullies? Do I allow them to define me or the friends I choose?

These are not easy questions, for as we know as kids enter school, and even before, the peer group that they find themselves in may unhappily define what behaviors they themselves find acceptable…..or unacceptable.

Kids may find Mac and Will the “apple” of their eye in this sweet and tasty treat of a friendship with bite. Courage is a theme in some of Ernest Hemingway’s books, so maybe there is something to a writing DNA gene. If so, Edward’s story of Mac is proof that genes and apples with character will out.