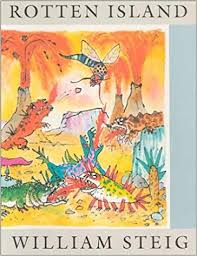 Every time I think to myself, oh Liz, too late to do that, didn’t accomplish that, never gonna tick that one off the list of “you should do,” I am comforted tremendously by the life of William Steig.

A renowned illustrator for The New Yorker since the 30’s, he decided sometime in his 60’s, that he would try his hand at children’s books –  both picture and chapter.

And thank the good Lord that he did.

Accompanied by gifts of illustrative wonder, coupled with sly wit and whimsy, he has charmed, entertained and enlightened generations of young readers, since he took the plunge into children’s books.

Sounds easy, right? Try it. Young readers know the real deal and can sniff out insincerity with someone who forgot what their world is really made of…and William Steig never forgot.

His “Sylvester and the Magic Pebble,” is a delightful tale of “be careful what you wish for when holding a wishing stone… and, for heaven’s sake, DON”T drop it, after a panicked wish transforms you into a huge ROCK and the stone ROLLS OFF!”

Just how do you unwish THAT wish NOW? It was a big hit right off.

It won the coveted and distinguished Caldecott Medal in 1970 for best picture book, as well as being nominated for the National Book Award for Young People’s Literature.

In 1990, a picture book called “Shrek” about two ogres that fell in love, won readers’ hearts and THAT came to the big screen in 2001. Oh, and by the by, SHREK won an Academy Award, for its animated feature film.

Long way ’round the block to Steig’s Rotten Island, originally called The Bad Island when initially published in 1969. It’s rotten and riotously wonderful.

Here’s a quote from the flyleaf:

to be as rotten as possible? If everyday was a free-for-all; if all plants

grew barbed wire; if the ocean were poison?

That’s life on Rotten Island. For creatures that slither, creep

and crawl (not to mention bite, scratch, and play nasty tricks),

Sound familiar? Maybe it’s the state of the culture today? But I digress from “Rotten Island.” But, then again maybe I don’t.

Maybe William Steig saw the culture and the atmospheric climate, even in 1969, as a munch fest…eat or be eaten; winner take all; a downward spiral of dark destruction. And nothing changes….until it does.

They loved their rotten life. They loved hating and hissing at one another,

venting their hideous feelings. It tickled them to be cruel and to give each

other bad dreams. rotten Island was their Paradise.

THEN, one day a mysterious object emerges from the detritus and debris. It is a “lovely flower growing in a bed of gravel.” Fear and anger ensue.

“They had never seen anything so beautiful; they found it scary and repulsive.

And what Steig paints is a storm of suspicion that poisons the inhabitants of Rotten Island. As more flowers grow, the intensity of furor grows…insults are hurled and fire is spat.

Battles raged . It was WAR! It was every rotten one for his own rotten self

bellowed and screamed. They flung themselves one at the another, inflicting

Steig’s art work is a panoply of paint with colors and pointy-toothed animals having at one another because they love it and know no other way. It’s a feast for the eyes and ears for young readers as William Steig uses vocabulary that is as full of the intensity of the emotions the creatures feel and as his fiery and feverishly evocative as art can portray. Kids will revel in it.

At the conclusion, war in Rotten Island has come and gone. And, in its place is a changed domain. Rotten island is no more. All possible flowers of unbelievable beauty emerge. Even the very first birds descend on it.

Where all those fearsome creatures had given up theirs ghosts, there were

now flowers of all possible kinds, each one as lovely as the rest.

I don’t know if William Steig was a believer in global warming, climate change or the other buzz word of “extreme weather.” Or even, does weather influence behavior?

But, it appears here that change can be for good or ill, yet it can be threatening and even destructive if fear holds sway in the extreme.

Steig seemed to hold the belief that Nature seems to have the ability to right itself and renew if given the chance…and even if it isn’t.

William Steig’s powerful art and narrative seems to be saying that man has the same ability.

The question is left hanging for the young reader…will man use it willingly, or through fear, will it be foisted upon him?

Don’t let your young reader miss the chance to visit  William Steig’s Rotten Island and form their own ideas and solutions to the island inhabitants’ self-imposed dilemma.

This is picture book art and narrative to be thoughtfully enjoyed…and even pondered.

And especially in the cultural climate of 2021, Steig’s message is very prescient via this picture book that intimates that perhaps things have to pancake before they get better.