May 8, 2021 was the 76th Anniversary of VE Day or Victory in Europe Day Ending WWII…at Least On That Front. And today, August 15, 2021 is VJ Day or Victory in Japan Day Marking 76 Years Since Imperial Japan Surrendered to the Allies. 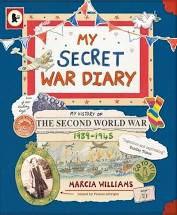 On this day, the Allies achieved the unconditional surrender of the forces of Nazis Germany whose titanic arm of forced intrusion was launched against most of Europe in an attempt to gain sovereignty.

I wonder if many or any of my young readers know this? Do they, at their young ages, realize to any degree the supreme sacrifices made by the Greatest Generation of their great grandfathers to end a six year war that spanned the world?

If they do not, I urge you to help them find out about this part of our nation’s history, and if you can provide them with age-appropriate reading materials that will encourage further research and respect for the sacrifices many young men and women in their early twenties and even younger, made, as the United States and many other countries, faced this event.

One of the books you could start with is called “My Secret War Diary by Flossie Albright : My History of the Second World War, 1939-1945,” by Marcia Williams.

Told in a first person narrative by nine year old Flossie, it begins in 1939 as Britain declares war on Germany. Flossie’s dad goes off to war and she is left to care for her baby brother and great-uncle.

It’s done in a collage style, with memorabilia, postcards and photos added that lift Flossie’s story to a level of reality, as young readers see and read the impact of WWII on one young life, a country, a family and a world.

How will Flossie embrace and endure the unknowns of war and her added responsibilities?

Will her father return after six years and the war is over?

Marcia Williams’ narrative of young Flossie’s adjustment to war and the additional responsibilities she must suddenly shoulder as the fabric of family life and routine changes is a realistic view of war seen through the eyes of a child and its impact.

It is also, in a way, very hopeful that young people can and do rise to the occasion when sudden necessity or adversity demand it, aided by the support systems of family, friends and community augmenting the process.

Just as the Covid pandemic is a war of sorts in the 21st century that is being fought and as the war on polio was fought and won in the 40’s by Jonas Salk and the March of Dimes, the private sector rose to seek and find a cure.

I know because I was the beneficiary of that determination when I was two and my brother and I had polio.

Determination, resilience and a healthy dose of hope is the prescription for what is needed for young readers as they navigate life in the new normal of 2021.