The Sport of Basketball and the Man Who Invented It! 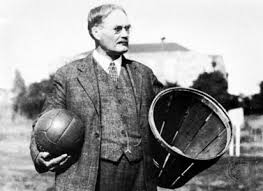 Picture it; it’s 1891 and students are stuck inside  for days on end with no outside playtime to run off all that pent up energy. What ensued was wholesale chaos and roughhousing in the halls. Mr. Naismith attempted to organize a game of modified football in the halls. Result? Boredom sets in quickly.

Naismith comes up with an idea of nailing two peach baskets at each end of the gym. Calling the students to the gym, he organizes them into teams of nine each and tells them the idea is to throw the ball (an old soccer ball) into the opposing team’s peach basket.

Blowing a whistle, the first game of basketball commences. One problem occurs quickly: not enough rules to the game. Students were “tackling one another, kicking and punching in the clinches.”

Before the melee ends, there is one student knocked out, several black eyes and even one with a dislocated shoulder. But, despite the kerfuffle the students were begging Naismith for another go.

So, Naismith made up more rules and the seemimgly most important of all was initiated; NO RUNNING WITH THE BALL!

No more tackling and slugging.

Ten years hence and basketball ends up being played all over the country and in the Summer Olympics debut of 1936 in Berlin.

***The above information was gleaned from a radio interview “We the People,” hosted by Gabriel Heatter on WOR AM.

Here are just a few books for young readers who are interested in more on the no tackling game of B ball:

The A-Z Basketball Book – What Every Player Needs to Know to Be Great in the Game. – Gary Pluff

My First Book of Basketball: A Rookie Book – The Editors of Sports Illustrated

The Old Basketball: A Story of Compassion – Lisa Box Ingram and C.E. Glaze

Here are the original rules of basketball formulated by James Naismith: