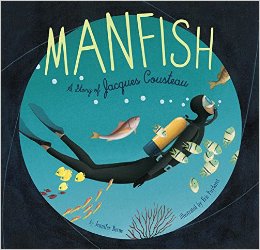 Manfish: A Story Of Jacques Cousteau

Do you have a “manfish” or “womanfish” in your family? And by that, I mean someone who from their earliest years, has been more comfortable in the water, than out?

Then, this summer, here is a great read that is both informational and inspirational, as it relates the story of the boyhood beginnings of world-famous oceanographer, Jacques Cousteau, and how an early aquatic curiosity shaped a life-long passion that fueled not only a career, but a cause.

Jennifer Berne in her picture book called Manfish: A Story of Jacques Cousteau, with accompanying art by Eric Puybaret, gives young readers an early and enlightening look at the young Jacques with his love of, comfort about, and ease in, sea surroundings, along with a passionate desire to make his underwater time, as effortless as breathing on land; breathing, in essence, like a “manfish.”

Jacques is even born in the summer. And from that warm and sun lit beginning in France:

it felt on his hands, his body. And water

made him wonder. He wondered why

ships floated. Why he floated. And why

In reading a story about a man who hid underwater by breathing through a long tube, young Jacques tries and fails to do the same. He finds it impossible.

But, it sets him dreaming that someday…he, too, will be able to breathe under the sea.

From that moment, comes a period of experimenting and writing illustrated books with his own drawings. He is drawn to machines, even building a crane as tall as he was – that worked.

Movies were also a source of fascination, as well. He strove to know how films were made, the workings of cameras… even going so far as to save for one – then taking it apart and putting it back together.

And then he starts filming – everything around him; family and friends are part of his filmed subjects, but:

Jacques was always the star,

the director, the writer. And usually

Finishing school, Jacques joins the French navy and sees the world. In China, he sees men catching fish underwater, with bare hands, holding their breath for long minutes. What would that feel like?

Then, a friend gives him goggles and a rubber-framed mask….and the undersea portal opens as if a door to an undiscovered world comes to life.

Kids will delight in Cousteau’s inventive spirit in creating a waterproof case for his camera. And did you know he invented the breathing tank apparatus called the aqualung, which, at last, gave him the ability to …swim, glide and dive unfettered, beneath the sea he so loved? He could even do flips and somersaults…underwater.

But, how to explore the oceans of the world is the big question?  Cousteau finds a “big, old wooden navy ship named “Calypso.” In a year, he morphs it from a war ship to an exploration vessel.

Cousteau and friends, Didi and Philippe, gather a crew, and the rest is a voyage of discovery to “film a world that no one had ever seen before.”

Giant whales, sea turtles, plants that could feed you, and “plants that looked like fish and fish that looked like plants,” plus friendly porpoises, and less than friendly and frightening sharks, are all part of this undersea discovery world that Jacques Cousteau’s voyages aboard the Calypso, unveiled for the world to see.

Cousteau’s early interest in film making returns, realizing after his own personal voyage, that his mission is film making to make movies for the world to see, as he notices plant and fish life dying:

Jacques knew what he had to do. He had to make movies.

Movies to warn people. Movies to save the sea.

And its accessibility is brought to life by award winning illustrator, Eric Puybaret’s drawings. Their literal depth of varying shades of blues, greens and inky mixtures of both, bring the luminous and unfathomable deep, both real and rich, truly alive for the youngest of readers.  Puybaret’s art visualizes for readers Cousteau’s “rallying cry” of  Il faut aller voir, or “We must go and see for ourselves.”

So, if you have a young reader that has an early and unrelenting curiosity towards  knowledge of all things aquatic, then Jennifer Berne’s “Manfish; A Story of Jacques Cousteau” is a great place to begin to satisfy that inquiring mind this summer.

Please enjoy singer/songwriter and environmentalist John Denver’s lilting and lovely homage to both Cousteau and the crew of the Calypso.

Here are both the lyrics and the song: